A Tiramisu recipe with a difference! You’ll love the fresh, creamy taste of this yummy Raspberry Tiramisu. Perfect for all the family and those who aren’t big coffee fans.

Since my love for coffee grew as I got older (and more in need of a daily caffeine pick me up!) I fell in love with traditional Italian tiramisu in all it’s creamy delightfulness! Yes, I know, this raspberry version doesn’t contain a hint of coffee like the more traditional variety. The boys aren’t keen on the coffee flavour just yet, so I couldn’t really justify making a traditional tiramisu and diving into it all by myself.

Well, I could, but I don’t think I would be able to go near the scales for the next century for fear of having consumed about a gazillion calories!

Indulgent dessert recipes like this are also great for parties and entertaining. You’ll be guaranteed to impress your friends when you bring this out and serve with a cool glass of white wine.

If you’ve never heard of this Italian dessert, tiramisu is a non baked chilled dessert consisting of savoiardi or ladyfingers as you might hear them called in the UK, which are soaked in cold espresso and Marsala wine. These sponge fingers are then layered between a mixture of mascarpone, eggs and sugar and a little more Marsala wine and topped with a sprinkling of cocoa powder.

My family friendly version of tiramisu here, consists of a similar creamy mix, but without the wine. I still use savoiardi ladyfingers but they are soaked in a mixture of raspberries, rum, orange juice and sugar. If you want an alcohol free version of this tiramisu, just omit the rum. I still dust the top with cocoa powder just the same.

The great thing is, if you are making this raspberry tiramisu when raspberries aren’t in season, this will taste just as amazing with frozen ones. A little more squidgy and messy perhaps, but still tasty. Just close your eyes, enjoy, imagine the sun has come out of hiding and summer has arrived!

I like to really soak the sponge fingers, the raspberry flavour should be soaked right through to the middle, so leave them in the raspberry sauce but remove them just before they become too soggy, just handle with care when you are layering the tiramisu so you don’t just create a spongy mess!

An alternative to topping with cocoa powder would be to top with grated dark chocolate or even white chocolate if you’d prefer.

I would recommend decorating the top with the raspberries, just before you serve your tiramisu. This will stop the raspberries seeping into the creamy top layer and making a mess. If you’re using frozen raspberries in this recipe, I would advise against using frozen ones as decoration and just go with shredded chocolate or cocoa powder.

You need to give this tiramisu recipe time to chill, this is important to allow it to firm up before serving.

A good alternative to raspberries in this fruit tiramisu are strawberries, they may take a little longer to break down when creating your sauce but the rest of the steps will be the same.

How do I store tiramisu?

Tiramisu should be kept refrigerated, it is best eaten within 1-2 days but will last about 4 days.

Can I make this tiramisu alcohol free?

Of course, just omit the rum in the recipe.

Are you looking for more dessert recipes? Head on over and try this strawberry pavlova recipe now! 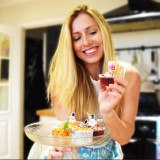 Fruity Coleslaw With Apple and Raisins