A Jam doughnut is a favourite treat in our house and they are really fun to make! If you fancy a fun, sugar coated project this week, you must try these!

A packet of doughnuts doesn’t last long in our house! Not that long ago, there was a deafening silence from the kitchen as I was putting newly washed clothes away in another room. When you are a mum to two mischevous young boys, silence can only mean one thing…. Trouble!!

So, I began calling their names, silence still reigned. I tried one more time before abandoning the washing to go and see what they were up to.

I marched back to the kitchen but clearly wasn’t quick enough. The boys had managed to polish off an entire bag of fresh doughnuts I had bought that morning. As they both looked up at me innocently with sugar coated faces, I couldn’t be angry…. I just need to remember to hide one away for me!

Who doesn’t love a sugary project in the kitchen? Jam doughnuts are so much fun! I love to watch the them turn a crispy golden brown as they float around in the oil. It reminds me of the days we used to visit the seafront pier as a child. You could buy fresh doughnuts and watch as they were made fresh, using a special machine that would pour the batter into the oil. The doughnuts would then trundle along a little oil path before being flung out into a bowl of sugar. Watching this was just as good as eating them in the end!

I have to try really hard to resist sampling them still warm! 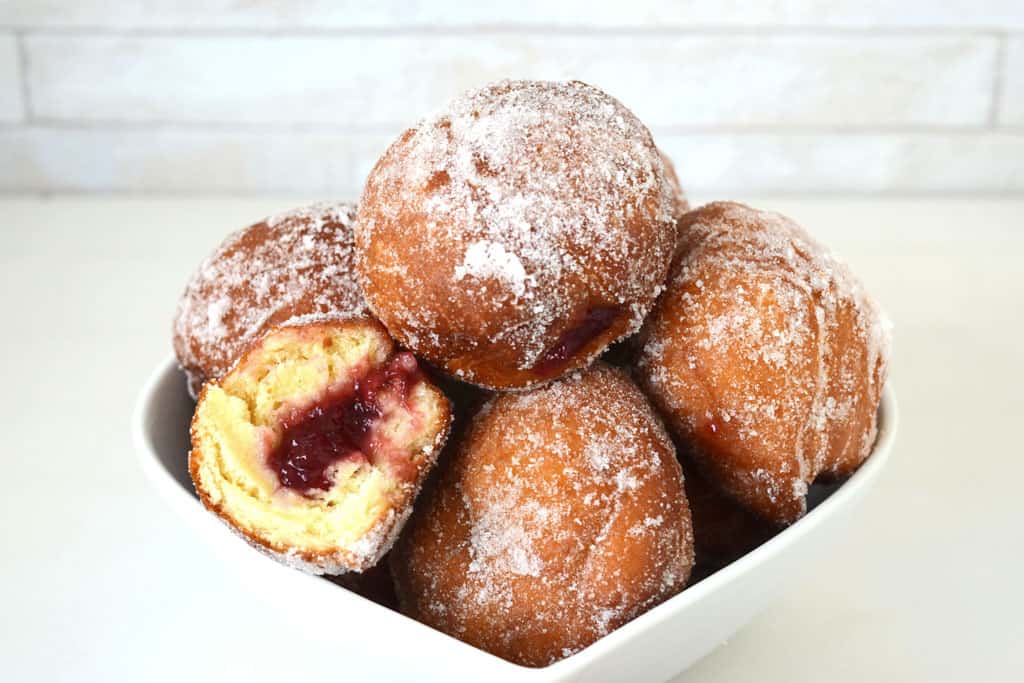 If you have any left over, try making this doughnut pudding. It’s a great reason to make doughnuts just for this!