Doughnut Pudding is a great recipe for when you have some doughnuts that have gone a little stale. This dessert recipe is the perfect way to liven them up again. A version of bread and butter pudding with a twist!

There aren’t many food items in the kitchen I would get excited about if they happen to go past their best. But stale doughnuts are definitely something to be grateful for!

Having doughnuts in our house that actually have the chance to go a little stale is pretty hard. The last bag was quietly polished off in it’s entirety by Bam Bam who had noticed them on the side and had quietly snuck away with them.

I should know by now that a quiet 3 year old usually indicates trouble!

But, luckily, I did have a stale bag. I had taken advantage of a 2 for 1 off and had forgotten about the second bag. So, my creative kitchen imagination set to work as I stared at the bag of doughnuts. And, all of a sudden, this doughnut pudding recipe was born.

I love traditional puddings. It reminds me of childhood and all of it’s simplistic pleasures. This doughnut pudding recipe blends two of my favourites together. It’s somewhere between a jam roly poly and bread and butter pudding.

The new generation of traditional pud in all its jammy wonderfulness!

Serve it warm and it’s even better with a big dollop of ice cream plonked on top. The kids will love this recipe, and perhaps, won’t mind so much when they see you hiding away a bag of doughnuts just for this pudding occasion.

So it isn’t really so wrong that I actually have another bag of doughnuts “hidden” in the cupboard in the hope of making this again in a few days. The boys will understand when I serve this recipe again after dinner. 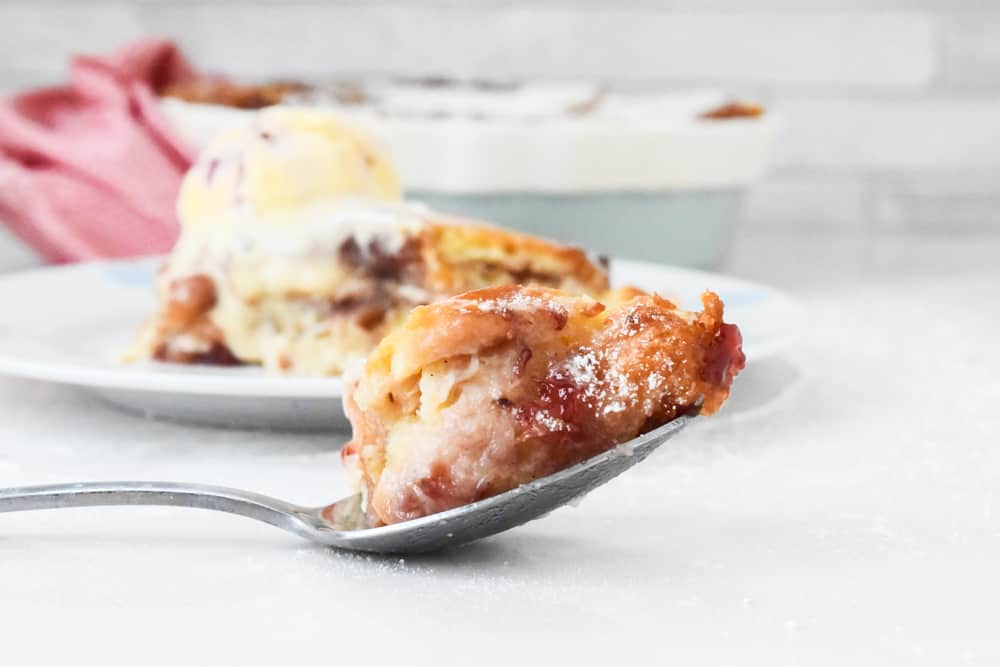 Looking for more Jam based recipes?

Make your own doughnuts from scratch with this Jam Doughnut recipe now.